I’ve always had a bit of a ‘thing’ about sheds! Apart from being a great place to store tools, shelter from the rain, hide Easter eggs or hang a mirror(!) they can also add structure and shape to a garden design. Sheds can be practical or pretty (preferably both), ramshackle or brand new, but they are always a useful bit of garden ‘furniture’.

Our allotment shed was central to our garden plans and had to be in just the right place – easy to get in and out of and lovely to look at. But we had a fight on our hands. It was shed ‘versus’ rhubarb…. 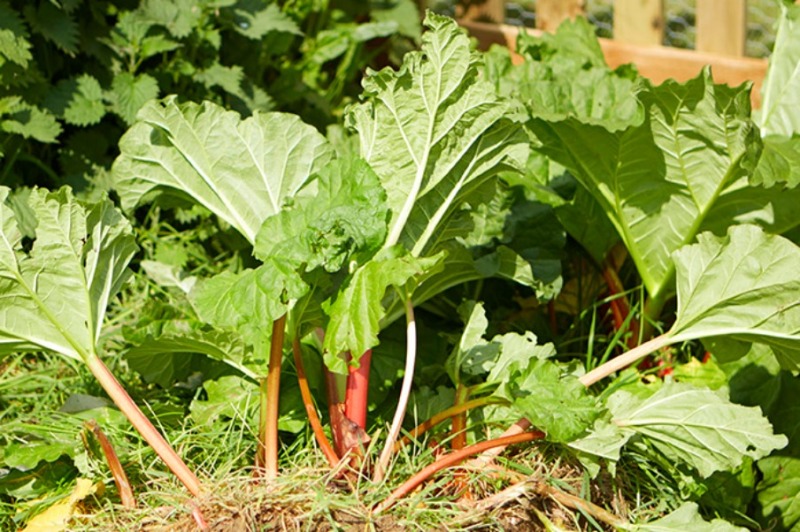 When we took over our allotment garden in late Spring, we were lucky enough to inherit some delicious looking rhubarb, but it was growing in the wrong place….right where we planned to put the new shed! We mulled over this dilemma as we tucked into some tasty rhubarb crumbles and enjoyed some awesome stewed rhubarb and custard…

The rhubarb was growing fast, which is a really bad time to move any established plant and we certainly didn’t want to risk killing this lovely new addition to our cooking! Hmmm…what to do.

Choosing a shed was much harder than we thought as there were so many different designs. In the end our choice was dictated by allotment rules (no bigger that 6x4ft), cost and design (we wanted the door to open on the long side of the shed, with a window next to it).

We chose one of the cheapest sheds, which may be a little short-sighted, but there was a budget to stick to and we were saving up for bunting and pretty paint! The shed cost £179 from Elbec Garden Buildings (April 2014) and arrived flat-packed and needing assembly.

The rhubarb won. We decided to put the shed in a different corner of the allotment. This is a very rare picture of the shed in its ‘first’ position….. ho hum!

I knew it was in the wrong place as soon as the roof went on, but didn’t have the heart to say so. I tried to get used to it, but after a few days I knew it wouldn’t work – I really wanted the flower bed and circular lawn to go there. And so I asked very nicely if the shed could possibly be moved to the place we had originally intended for it.

So I guess the shed won in the end. And that meant moving the rhubarb….. 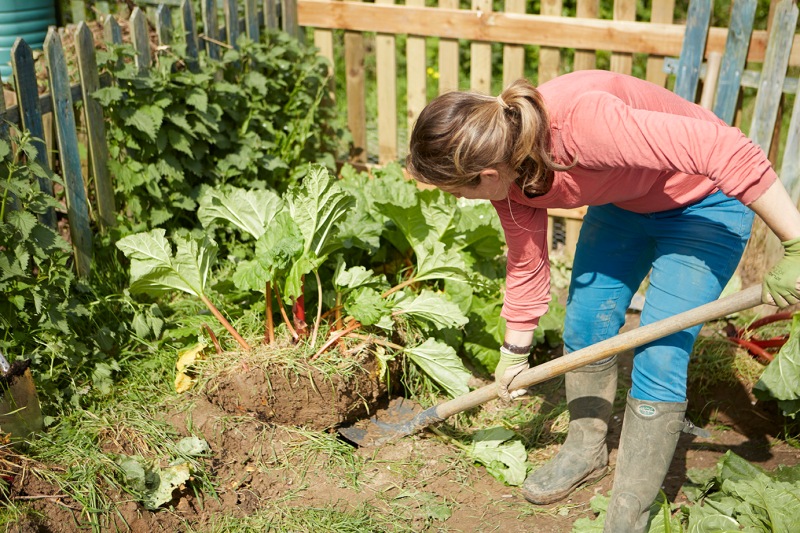 It’s always best to move established plants when they’re dormant. For rhubarb that means late Autumn through to late Winter, giving them the best chance of surviving the shock of a move. Relocating in May was definitely a risk!

Rhubarb has really long roots, so we needed to dig as big a root ball as possible for each ‘crown’. They like any soil as long as it’s well-drained and in full sun and really benefit from well-rotted manure, so we filled their new holes with a bucket of the smelly stuff and added a handful of a potent biodynamic compost called CPP.

Usually the crowns should be planted with the growing buds at or just below the soil surface, but our rhubarb was in full growth, so we just bunged them in, trimmed them back and hoped for the best. The plants were spaced 1m (3ft) apart in a single row.

We kept them well watered with diluted CPP over the next few weeks, as the weather was hot. They wilted alarmingly at first, but soon perked up and settled into their new home without too much fuss. It’s not advised to harvest rhubarb in the first year after planting and to harvest only lightly in the second year to avoid weakening the crowns, so we didn’t pick any stems and dreamt about rhubarb crumble instead!

Biodynamic Compost: CPP (Cow Pat Pit or Barrel Compost) is a naturally powerful concentrate of cow poo and herbs that enriches the soil, improves its structure and texture and encourages microbial life. It’s good stuff! I’ll write a post about how to make it when I get a spare minute…

Biodynamic Gardening Tips: It’s best to move an established plant when the moon is descending, as this draws the energy into the roots helping them to connect with the soil and reestablish more quickly. To give our rhubarb the best possible chance, we also waited for a ‘leaf’ period in the calendar (sounds weird, but if you think about it we’re eating the stems of leaves, hence it’s best to cultivate rhubarb on a leaf day).

Harvesting rhubarb stems is best done when the moon is ascending – the strength, vigour and flavour of the plant is drawn up into the stems, so they taste better and store for longer. A biodynamic gardening calendar will tell you when these times are (you can read more about calendars here).

And so this part of the story has a happy ending! The shed settled into its second new home and the rhubarb survived the stress of being moved at the wrong time. The allotment garden was really coming together. All in a days work…..

4 thoughts on “Creating a Garden Pt 4: Sheds and Rhubarb”

© Homegrown Kate 2017. Unauthorized use and/or duplication of this material without express and written permission from this blog’s author and/or owner is strictly prohibited. Excerpts and links may be used, provided that full and clear credit is given to Homegrown Kate with appropriate and specific direction to the original content. A lot of love and a lot of time goes into creating this blog, so please give credit where credit is due. Thank you.