We got our first allotment in April 2011 because our own back garden was being outgrown by children, fruit, vegetables, chickens, rabbits and guinea pigs! It was a 5 minute walk from our house, which was perfect as we needed to keep things as simple as possible. And if I wanted some lettuce for my salad I wanted to be able to run down and pick it, almost as easily as if it were still in my back garden! We decided to move all the fruit and veg growing down to the allotment, plus the chickens and got stuck in straight away.

We were lucky enough to be given an allotment that had been well kept by the previous owners, so there weren’t too many weeds and we were able to grow quite a few things that year. Many highs and lows followed that I’ll fill you in on at some point, but in 2014 we felt we needed more growing space, so we asked for another allotment. By chance, the one next to us was available. This was a huge project, but one we were ready to embrace as part of our quest for a more simple, self sufficient lifestyle. We combined the two plots and began work in earnest in April 2014. 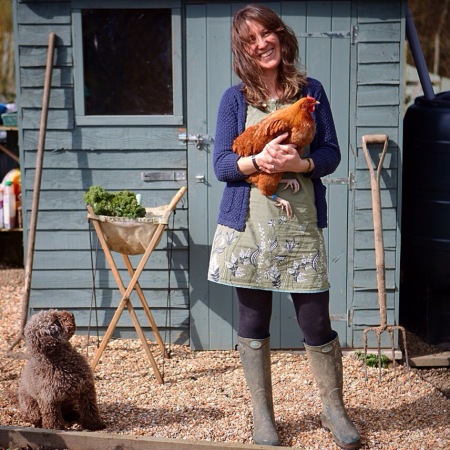 © Homegrown Kate 2017. Unauthorized use and/or duplication of this material without express and written permission from this blog’s author and/or owner is strictly prohibited. Excerpts and links may be used, provided that full and clear credit is given to Homegrown Kate with appropriate and specific direction to the original content. A lot of love and a lot of time goes into creating this blog, so please give credit where credit is due. Thank you.